Frozen 3: Inspired by watching some of the Winter Olympics, Kazoo's Tiny and Teeny Editors have gotten into ice skating, which means I'm on skates, too—for the first time in forever. One of the best and also most humbling things about parenting is remembering how to fall. (Notice I'm wearing a helmet.)

Behind the Music: When it's so cold like this, during my daily park walks, I think about Kristen Anderson-Lopez, the Oscar-, Grammy-, Emmy-award-winning lyricist responsible for getting all those Frozen songs stuck in our heads. (I interviewed her for the maze in our Daydreamers Issue, #17. You might not remember this because it was summer 2020, or approximately 127 years ago). She told me that the first incarnation of Frozen had Elsa as a villain with blue skin and spiky hair! As she was writing with her husband Bobby, a composer, it took them a while to create the Elsa and Anna we know and love. Here's more from our conversation:

"When I came up with the hook, Let it Go, we were writing in our 400 square ft studio apartment in Brooklyn, where we'd get moody and just drive each other nuts. But, one beautiful day, we went for a walk in Prospect Park, and we started talking about what a relief it'd be to let go of the control you needed to be perfect. We were trying to find the universal in Let it Go. When had we experienced that? Bobby, who was always a straight-A student, said he thought it'd be scary but liberating to let himself fail for once, to let go of the pressure to always be the best. I said, 'So you mean, like being a mom of young kids, where you have to be always creative and cook the quinoa and have a good career and try to stay thin and have a nice house and try to be a good friend and try to give to charity? All the ways of being a working mother, it's absolutely impossible. You can't be perfect. There are those moments, when you just let it fall to the floor. Like, we’re ordering pizza and I'm putting on yoga pants and I’m going to drink chardonnay. Those moments when you let yourself off the hook?' Then I jumped up on a picnic table and started imagining: I'm Elsa, my secret is coming out. I’m on a mountain all alone and I feel both horrible because my life has fallen apart and exhilarated because what does it mean to be my true self? And, Bobby came up with 'the snow glows white on the mountain tonight.' I put in the 'don't let them in, don't let them see.' I jumped down, and we headed back to our studio. We wrote 'Let It Go' in 36 hours. That was really fun. I could tell, when I was first singing it, how fun it was going to be."

Even in this cold, I like to imagine that I might walk by someone standing on a picnic table somewhere just writing a huge hit, and it makes me happy to remember that creativity is happening, even in the craziest of times, absolutely everywhere.

Wordle for Kids: Speaking of fun, the little editors are becoming world-class Wordle players. (Or so it seems, when they beat me!) If your kids are old enough, it's a blast to do together every morning. If you want more puzzles, there's a new game for younger kids, Spellie.

Black History Month Books: The Brooklyn Library shares the best Biographies of Black Excellence, and New York magazine shares the Best Kids Books to read during Black History Month (and all year long). Some of our household favorites from this list: Ada Twist, Scientist, Brown Girl Dreaming, and The Hill We Climb.

But Why? It is really hard to know how to talk to kids about war, and heartbreaking that we now have to try to explain the inexplicable. It's easy to talk about peace, though. In our Art issue, we interview Carol Wells, Executive Director of the Center for the Study of Political Graphics, about how art can change the world. 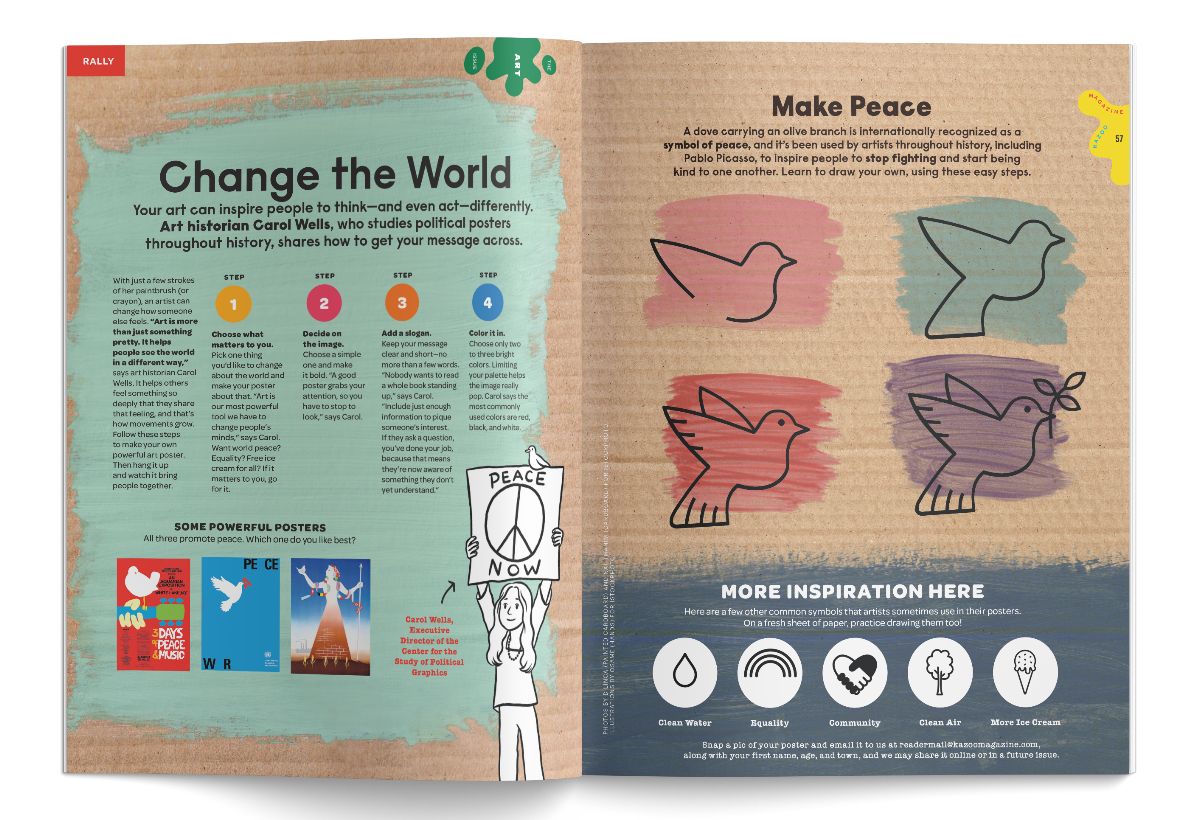 To start the discussion, we encourage kids to make a poster that might inspire peace. Snap a pic of your poster and email it to us: readermail@kazoomagazine.com and we may share it online or in a future issue.

National Magazine Awards: Kazoo's a finalist for TWO "Ellie" awards, the highest honor in the magazine industry! (They're like the Oscars for magazines, except a tiny bit less glamorous and no swag bags.) We're thrilled with the nods for Best Illustrated Story and Best Single Topic Issue of 2022, both from our Art Issue, #23, available in our shop now.

Goodnight Girl: Even though our girls have outgrown them, we can't bear to part with our tattered copies of Goodnight Moon and The Runaway Bunny. It turns out their author, Margaret Wise Brown, was as spectacular as the books she left us. My old friend Anna Holmes writes the fascinating story of The Radical Woman Behind Goodnight Moon in the The New Yorker.

Parenting is Political: We sometimes get emails complaining that our magazine is too political. Our response: OK? (Once someone even cancelled their subscription because we featured Stacey Abrams talking about the importance of ... democracy.) Because, everything is political and the very least we can do is say something. Here's a story about Mildred Harnack, an American grad student in Berlin, who saw Germany become a fascist dictatorship. She did so much more, and her resistance is an inspiration.

Bird Rescue: We happened upon an injured red-tailed hawk and joined up with some Brooklyn birders to save it. (We hope.) Read the whole tale and see video of the hawk, here.

Coming Soon: Issue 24 is OTW to subscribers now!!! It's all about Magic! 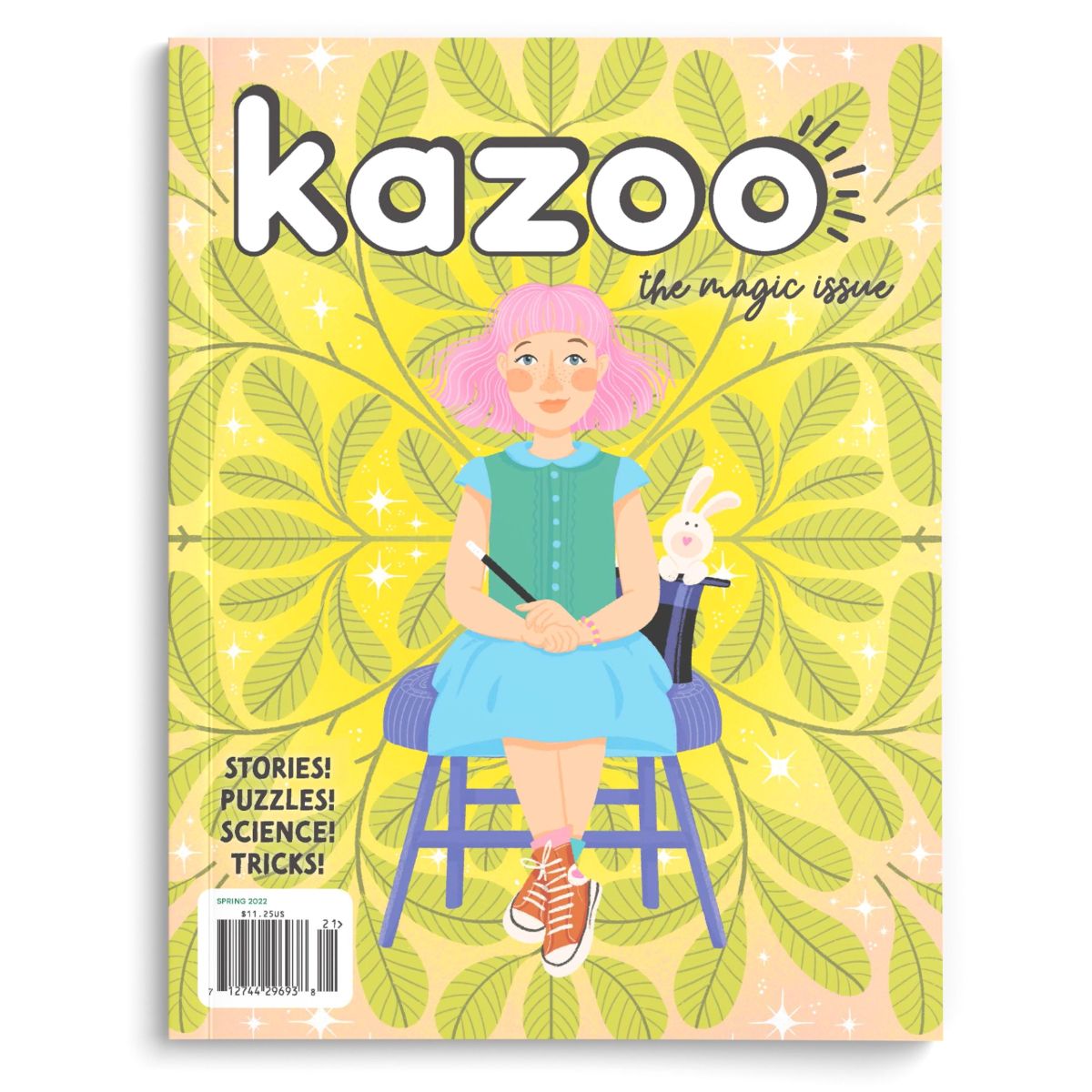 In the north east, February sometimes feels like winter will never end. Reading the news this morning, it also feels like we're just getting out of one crisis and the world is falling into another. If you're finding it all hard to get through, remember some magic is on the way soon.

You can find me (erin@kazoomagazine.com) if you have some to spare.